The first Bishop of New Jersey – the Rt. Reverend John Croes – was consecrated in 1815, but despite regular calls for a Cathedral, 100 years passed before it became a reality. In 1916, New Jersey’s fifth bishop, Bishop Paul Matthews, authorized a Cathedral Foundation to raise funds, and on All Saints’ Day 1930, he chose a parish church in Trenton to be the Cathedral. Trinity Church on Academy Street had been consecrated seventy years earlier, in December 1860, but it quickly became apparent that there was insufficient land on the site at Academy Street to develop and extend the building in the way that would be required. So, just three weeks after its elevation to Cathedral status, Trinity Church merged with the church of All Saints’ on West State Street, whose site was surrounded by land that offered greater opportunities.

The land was purchased, and the Rector of All Saints’ – Ralph Ernest Urban – became the first Dean of the Cathedral. For the two years following his death in 1935, Bishop Matthews combined the roles of Dean and Bishop until the appointment of Frederic Magee Adams in 1939. Dean Adams successfully set about finding financial support for the new building project, and personally oversaw its construction. The former parish church of All Saints was skillfully incorporated into the plan. It forms the present Synod Hall, but some of its finest features, including an exquisitely carved rood screen, are preserved in the All Saints’ Chapel that is used for the early communion service every Sunday.
Dean Adams was succeeded by the Cathedral’s longest serving Dean, Lloyd Gage Chattin. Dean Chattin served for thirty three years (1960-1993), a period of great change, both in the church and in society.  A new and radically altered Book of Common Prayer came into use (as well as a new hymnal) and women were ordained as priests for the first time. The Cathedral accommodated these changes with relative ease. Changes in the economy of Trenton proved a much harder challenge. The city’s decline began in the 1970s, and families moved away to the suburbs. Exacerbated by a general decline in attendance at American mainstream churches, this placed great strains on the Cathedral’s membership and finances.
Still greater challenges lay ahead. Strife within both the Cathedral and the Diocese led to a period of eight years (1996-2004) when there was no Dean in post.  Yet thanks to strong lay leadership and a series of supply priests the Cathedral survived this great turmoil. Light first appeared at the end of the tunnel in 2000 with the appointment of Diane Nancekivell as Vicar, and then with the consecration of Bishop George Councell in 2002 who gave crucial episcopal support to the life and work of the Cathedral. Membership increased, outreach ministries were restored, building renovations were undertaken. Diane Nancekivell’s contribution to all this was marked by her elevation to Dean for the last two years of her ministry (2004-6).

After a short interim, the Very Reverend René R John was installed as the sixth Dean of Trinity Cathedral, bringing with him 23 years of experience in ministry. 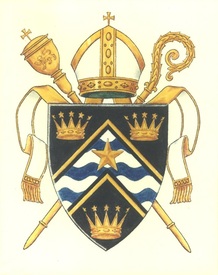